Stay in the loop.

Lend us your email address and we'll send you news and updates.

Even plants can get into the spirit of Halloween, so here are our top nine “spooky” plants (either by name, behavior or appearance) that may send a little chill down your spine!

9. Solanum quitoense, aka Naranjilla or Bed of Nails

Solanum quitoense is best admired from afar because its broad, fuzzy leaves are covered with inch-long spines. A member of the nightshade family, this plant’s Spanish common name (Naranjilla) means “little orange” because its fruit is round and bright orange when ripe. 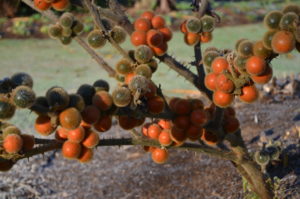 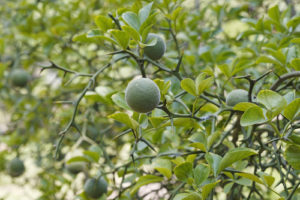 Datura is a genus of about nine species of flowering plants in the nightshade family. Commonly called devil’s trumpets. The plants produce large white to purple tinged trumpet flowers and spiny round seedpods. Daturas have been used as poisons, medicines, and ritual intoxicant agents since time immemorial. Another member of the nightshade family. American witch hazel posses some interesting lore and uses. The word “witch” in witch hazel originates from the Middle English “wiche,” meaning pliant or bendable. The use of witch hazel twigs as divining rods may have influenced the “witch” part of the name. 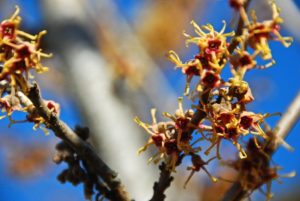 You may have to do a double-take on this one before you realize it’s a flower and not a spider! Bratonia (Brassia x Miltonia) and Brassia orchids look like spiders to attract female spider wasps for pollination. The blooms mimic the appearance of the spiders these wasps hunt. When the female spider wasp goes in for the kill, she is instead covered in pollen. She then goes on to another target, and the next orchid is pollinated. Brains! Zombies would love this plant. Although all members of the Celosia genus have fuzzy flowers, the waviness of the cockscomb’s flowers is pretty unique. It is caused by fasciation, which develops due to infections, certain insects or growing mutations. Also resembles the comb of a rooster, thus the common name cockscomb. The flowers almost resemble the facehugger creature from the movie “Alien.” Calotropis gigantea is perfect for Monarch butterfly larval development. They’re carnivorous! These meat-eaters hail from the bog wetlands of the Carolinas and digest insects that wander into the “trap.”  They’re being poached so much from their native areas that they may be added to the Endangered Species List 1. Sarracenia flavia, aka pitcher plant
Another carnivore! Insects are attracted to the plant’s vibrant color, crawl around on the pitcher plant’s rim, lose their footing and fall down into the pitcher. A sticky enzyme in the bottom ensures the insect can’t get back out. The insect then becomes nutritious “bug juice” for the plant.